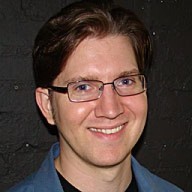 Ron is a computer scientist and engineer who loves finding ingenious solutions to complex problems. Having taught himself computer design and machine language by the age of twelve, Ron’s career has been characterized by an insatiable love of learning and an ability to absorb and synthesize new technologies and concepts extremely quickly. In addition to his scientific and technological pursuits, Ron is also an avid entrepreneur and small-business consultant who has spent the last decade working closely with companies of all sizes to improve their core products and business processes.

Ron began working as an independent IT consultant in 1997 while earning simultaneous degrees from Case Western Reserve University in computer science and engineering and theater acting. He has consulted ever since, working with a few Fortune 500 companies and a host of small businesses in northeastern Ohio. In 2008, desiring to grow a product-based company, Ron began searching for a viable opportunity. He saw a great potential market for a simple online broadcasting system and began putting together the core team to validate the market, develop the product, and launch BoxCast. As Chief Scientist at BoxCast, Ron is dedicated to keeping online broadcasting both simple and low cost while gaining an ever stronger competitive advantage.